The Order celebrates in all the world, and in different ways, the Day of the Augustinian Recollection 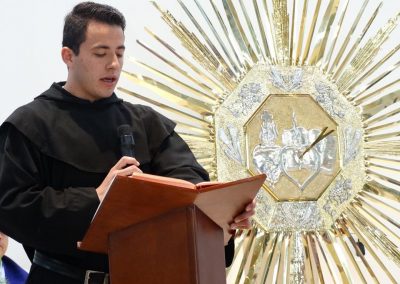 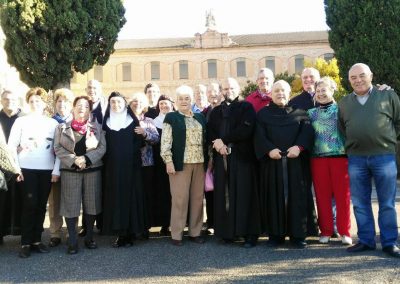 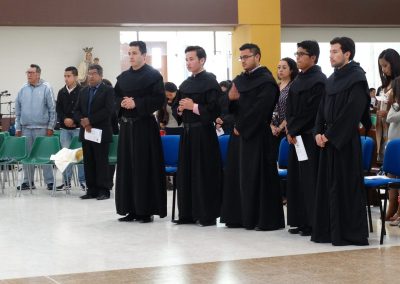 The Augustinian Recollection arose from a way of understanding the Augustinian life that has its roots in the Tridentine reform and the desire to live a more perfect life. Two main sources come together in it. The first is the legacy of the Order of St. Augustine, with its laws, its liturgy, its saints, its organization and its traditions.

The second is the Recollect movement, with its ascetic and spiritual demands. The first provides the channel, the material and mental structures, the basic relationship with St. Augustine and the main religious and cultural references. The second enriches this channel with a desire for radicality, which pushes the path of asceticism, equality, recollection and the spirit of prayer. The Council of Trent prepared a favorable climate for the germination of these ideals.

The celebration of the Day of the Collection took place on Saturday, December 3, at the Colegio Agustiniano. This year after the celebration of the Eucharist and the renewal of the vows, the documentary “Augustinian Recollects in a Global World” was presented by the journalist Agustín Remesal, who recounts the origin of the Order, history and current reality.

At 1730 hours in the auditorium of the Agusitniano College of Madrid began the celebration was opened with a Eucharist which, in the absence of the Prior Provincial of St. Nicholas of Tolentino, presided over his vicar, Rafael Mediavilla. Concelebrated 30 priests who came from the 11 communities of the Order in Madrid.

In addition a group of Augustinian Recollect missionaries headed by their superior general, Myrian Neira wanted to participate in this celebration. In addition, there were about thirty brothers from the five secular fraternities of Madrid, who had taken advantage of the Advent retreat in the College. And the meeting was completed by some friends and other people close to the Order.

In his homily, Rafael Mediavilla, framed the Collection in the historical and ecclesial coordinates, insisting on radicality as its defining value. And, after the homily, the religious present renewed their vows; Just as the Brothers of the Fraternity did next, renewing their own commitments.

Concluded the Eucharistic celebration and in the same hall of events, the presentation of the documentary began, the presentation of which was carried out by the friar Pablo Panedas, who explained the genesis and development of the idea and then it was Agustín Remesal himself who spoke about the characteristics Of the documentary. The documentary was then screened for the whole room. In a few minutes and in an impromptu speech, he expressed his satisfaction at having been able to work at ease and with complete freedom, and thanked both the Prior General of the Order and the two religious in whom Pablo Panedas most supported himself, Angel Martínez Cuesta.

In Bogotá the Augustinian Recollect family celebrated on Sunday December 4 the Day of the Augustinian Recollection. The renewal of the vows of 11 simple professed friars in the San Agustín Parish (Tagaste) was carried out, and in the same ceremony the blessing of the new parish church shrine was carried out and the acceptance letters were given to 4 aspirants from the city of Bogotá, which will be available to enter next year at the Major Seminary of St. Augustine in La Linda, Manizales.

In Rio de Janeiro, today the three communities present will be united there and at 9.00 (local time) they will have a conference on the Virgin Mary in Saint Augustine since this year is celebrating throughout the diocese the Marian Year. Later at 12 noon a celebration of a Eucharist will take place with the renewal of the vows of all the friars and then share a special lunch in community.

In Belém there was a lunch at the Seminary Santo Tomás de Villanueva with the friars of the communities, seminarians, representatives of FSAR, JAR, Madres Mônicas and CSSA (Social Center San Agostinho). At 20:00 the Eucharist was celebrated. It was the momment when the religious renewed their vows. The chorus of seminarians sang t the mass, helping to live with joy the greatness of that day.

In the city of Quezon and in the framework of the Marian celebration of the launching of the devotion of the Virgin of Health, will be held today at 9.00 am (local time) the Enthronement of Our Lady of Health in a Eucharist . Later a lecture on this Marian devotion will be given.

In Monachil (Granada), as in Madrid, the celebration of the Day of the Harvest took place on Saturday, December 3 and began, within the activities of the Advent retreat of the secular fraternities of Granada, at 18.00 Hours with the projection of a video about the birth and development of the Order. The whole event was presented by Fray Miguel Ángel Hernández.

Then, with the presence of the Friars Recollects who are in the communities of Granada, the religious Missionaries Augustinian Recollects and all the fraternities a choir of the parish delighted the attendants with popular songs of Granada followed by a poetic performance by a fraternity of Monachil And two missionary sisters, one from Tanzania and one from Guatemala enlivened those present with different songs.

Finally, there was a solemn Eucharist presided over by Fray Miguel Ángel Hernández and concelebrated by 14 Augustinian Recollect priests.