The Augustinian Recollect Family and its NGDO Haren Alde, under the coordination of the Social Apostolate Commission of the Order of Augustinian Recollects and its international solidarity network ARCORES, visited one of the villages of the mission of Chota that suffered the most El Niño floods. The entire Agustino-Recoleta Family is called to collaborate to help the many victims of this national emergency in Peru.

“Luckily the collapse went right and left. If he had come from the front, he would carry us” says Nelson, a member of one of the eight families living in Los Porongos, in the district of San Juan de Licupis, one of the least populated of the mission of the Augustinian Recollects in Chota, Cajamarca, Peru.

The “Coastal Child”, a climatic phenomenon that produces heavy rains in the river, was furious with the department of Arequipa, Piura and La Libertad. Chiclayo and Cajamarca, where the Augustinian Recollect Family works, also received the moist tantrums. The small district of San Juan de Licupis, among the poorest, most isolated and least inhabited in the province of Chota, suffered in a special way the consequences.

The nights of March 25 and 26, 2017 will be kept in the memory of the peasants of Los Porongos as a night of terror. That rain, frequent companion and expected visitor of all the marches, this year would play a very bad bad run.

Reina Carrasco summed it up in one sentence: “It was scary, it seemed that the water was coming upon us. We were scared. We did not know what to do”. The panic of the few families that inhabit this village is more credible when looking at the steep mountains that guard the town. These are green giants cut violently by aggressive gullies that mark their territory with impetus.

To aggravate the scene of terror, there is darkness, much greater on such a night when it rains, thunders and flashes. The Serrano sky, a friend of poets and dreamers, becomes a traitorous and dangerous enemy.

The rains had become stronger and stronger, at an increasing rate that lasted for more than a month. However, those two were the most terrible nights of their lives.

When arriving at Los Porongos we found just under a dozen simple adobe houses, roofed with old and rusty calamines. It is not a town like any other: there is no square, no school, no church. Domestic animals and poultry abound: turkeys and chickens walk freely, as rulers of that land.

The road leads directly onto a ravine. Now it is dry, but it has deep trenches and a varied collection of stones of all colors, shapes and sizes. Undoubtedly, they are the proofs of that terrible night.

After crossing the ravine, and closing the natural curve of the street, we see a spirited donkey tied to a house equal to the others: adobe, calaminas roofs and doors, some of wood and others of metal. Gates, like calamines, are also oxidized. However, the corridor of this house is well protected by a barrier of uniformly tied reeds, placed to protect the intimacy of the family.

Around the tied donkey, a gang of playful children. Nothing more to see us, suspend their games and activate their curiosity to the maximum. They are small and snooping. Perhaps you have already become accustomed to the unexpected visits of this time. People, like us, who come to take photos and bombard them with questions and fill them with promises.

Good afternoon! This is Los Porongos, “I say, raising my voice. A lady with lively and agile eyes tells us: “Get it! Arrive! “As a sign of hospitality. Next to her are four young women mingling with the children and a small calf tied to the fence. One of them does not stop combing with a huge pink comb and says: “Good afternoon. Yes, here is The Porongos. What are you looking for? “Far from answering, rather, we asked about the damages caused by the rains and the huayco, the avalanche.

Suddenly she leaves the interior of the house, an older woman with a cell phone in her hand, and points us towards the ravine. She seems to be the matriarch of this family. While the children look at us smiling and the women are silent, I take some photos of the people and themselves. But soon I stopped shooting, because the houses were finished.

The town is really small. Then the women and children cheerfully confirm the data we had collected earlier. And they indicate, by hand, the path to reach the huayco.

As we head towards the disaster area, the older woman starts to talk on the phone, almost screaming. We leave you behind. We follow the way up. The path is disfigured. The deep cuts on the earth have something awful.

We look higher and see a small, lonely, secluded house. Around it there are huge stones and cracks, we suppose by the huayco. We agreed. At 30 meters out of another house surrounded by chickens and turkeys a man in brown pants and garnet t-shirt.

Cayetano Arcila, already with his years, greets us kindly, chewing some food that had been kept in the mouth before leaving. We suppose he was having dinner, because he sleeps here early. There are more people in your house, lower than the others. And also the fence is made with a little reed. We greet you and tell you the reason for our visit.

He describes to us with lively emotion what happened. To accompany the story, he opens his eyes exaggeratedly and elastically stretches the wrinkles of his tanned face. Finally, he concludes his story: “We have never seen such a rain.” And that has always rained in the area and have never been in trouble. They have never complained about the rains, rather they are a blessing.

Cayetano recounts how the back wall of the building that functioned as a kindergarten was destroyed: “The avalanche of mud, stones, water and sticks knocked her down and took away the little teaching material that the teacher had to entertain Nine children who attended every day. It has taken everything, including the furniture. There is nothing left. “

When the huayco came down from the hill Panza negra, it split in two inverted Y-shaped. On the left side swept the pampa where the football field was. Then he went up the slope and took the building under construction of the new children’s school Luceritos de amor, a place of three environments that so much wanted in Los Porongos for their children.

Nelson Salazar asks the authorities to rebuild the kindergarten: “Give that joy back to our children. They lived quietly, playing, having fun. They learned what their cheerleader taught them. Now our children have tears in their eyes. ” When the huayco took it, it was not even finished because, as always, the authorities took the materials for the roof.

The huayco continued in his swift career and took the wall of the provisional nursery school and finally disappeared down the river.

While I take pictures, the conversation lights up and adds to it, Reina, Cayetano’s wife, who gives us some oranges and gives us a carpet to sit down. The people of this part of Peru are always generous. They carry it in their veins. They give you even what they do not have.

He says that for fear of the residents of Los Porongos that night and the following came together to sleep in two houses: “The rain roared and the thunder and lightning frightened us. The rains were at night. And it seemed that they were coming here, “he says pointing to his house.

The turkeys do not stop shouting. The male does not stop boasting and watching over his females. Accompanied by these good people, we decided to reach the remains of the huayco: a huge deposit of stones, shrubs and trunks truncated in what was once a football field.

Resentful of the wickedness of nature with these good peasants, we took a look at the remaining wall centimeters of the beloved kindergarten. There are still foundations and a few adobes. Above, in an arm of the tree that accompanied the construction, there is a nest of chilala, the bird to which the paisanos of this earth until have dedicated a popular song.

This bird builds its clay nest and is a jewel of animal architecture. The nest is still whole, like ironizing with the work of man’s mud, destroyed by Mother Nature. And we are thinking of the urgent reconstruction of this kindergarten so that the children of Los Porongos can smile again.

COLLABORATE WITH THE AUGUSTINIAN RECOLLECT FAMILY IN THIS EMERGENCY

In other countries you can collaborate through any community of the nearby Augustinian Recollect Family. 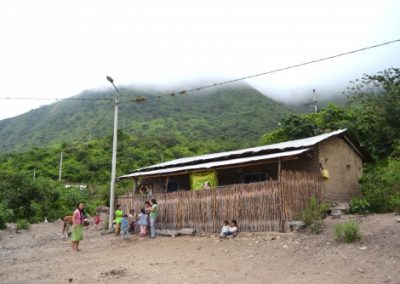 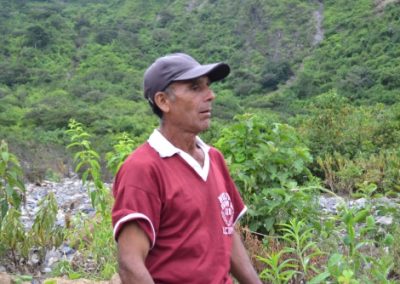 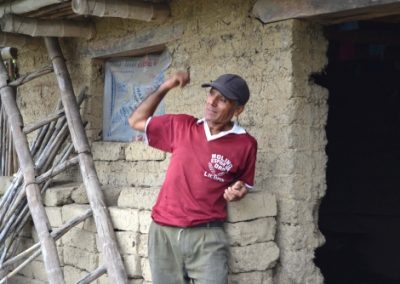 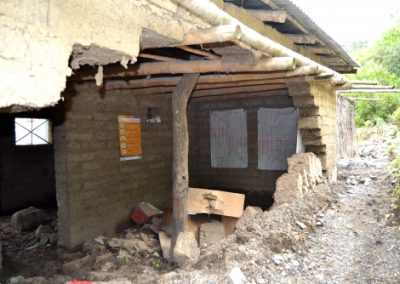 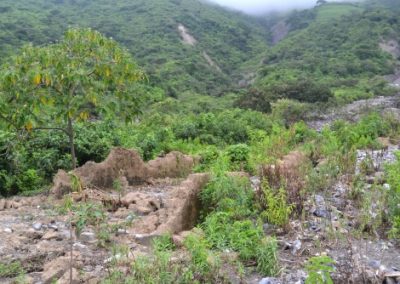 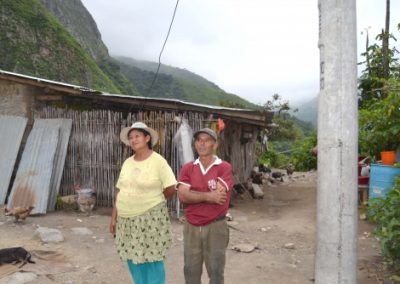 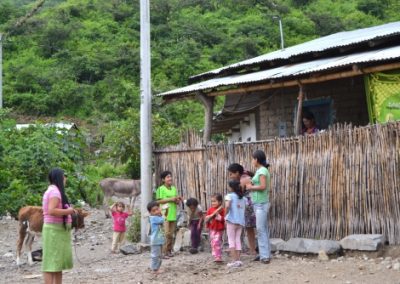