Chota is a small city located in the north of Peru in the middle of the Andes, in the region of Cajamarca. Around it there are a few small villages, of which, many do not have drinking water and its inhabitants take the water directly from the streams. The NGO Haren Alde Chota, with Fr. Angel as head of the same, has embarked on this exciting project to provide drinking water to some of these small towns. To this place have been Jesus and Miguel two young engineers with much desire to put their knowledge into practice in a project so beautiful and supportive. This is one of the first cooperation initiatives supported by ARCORES, the Augustinian Recollect International Solidarity Network.

It’s been 5 weeks since Jesus and Miguel arrived in Chota and work with the NGO is taking shape. The work with Haren Alde is varied and entertaining. Office hours, network building trips, meetings with neighborhood councils, visits to community homes or even a fortuitous interview with Santa Monica Radio have been in short the activities that the NGO has practiced for carry out this nice project to bring drinking water to this small Andean community of Centro Palma.

The first days in Chota were adaptive, cultural and lifestyle changes were something that Jesus and Miguel had to go learning and assimilating, as well as the “stomach adaptation” those little bugs called combined bacteria with the height of the people, About 2600 meters, that led these foreigners to suffer the so-called “Moctezuma curse” that every foreigner must suffer upon arriving in Latin America. Still, the team welcomed Jesus Haren Alde and Miguel great, the love and concern of them to the new inhabitants of Chota were comfortable, made within a week these two Spaniards feel at home.

Let’s talk a little about Chota, the NGO and the small community of Centro Palma.

Chota is a small city, center of an entire province of the same name, located in the region of Cajamarca. Framed in the middle of the Andes, in the north of Peru, it is an abrupt and mountainous region, plagued by valleys and small rivers that form an incredible landscape. It is somewhat isolated from the country’s own activity, which is mainly to the coast, which is about 6 hours from Chota by road. The main activity of Chota is agriculture and trout farms. Life is quiet, typical of a rural area and away from the mundane noise of the coast of Peru, its people are very nice and close and always care for everything is fine. As the center of the province, it has all the basic services for the needs of the inhabitants of the area. Its tradition bullfighting is very ingrained, as well as the breeding of guinea pigs (indian rabbit) to prepare the dishes in the parties.

Around Chota, in the valleys and mountains, there are many villages and small communities that live on agriculture, some of which are quite far from Chota, due to dirt roads and bumps. One of these communities is Centro Palma. These communities have more precarious services, including access to water, waste management, among others, which make infections and diseases spread and become chronic easily. Also, in addition to this, the road communications themselves make inaccessible to certain areas, which is detrimental to primary health care and the development of the region.

The community of Centro Palma, is situated on a slope facing east and extends throughout it on a slope of about 1500 meters, is made up of 105 scattered houses (there may be distances of 400 meters between houses), and in the middle of hillside There is a neighborhood center for community meetings and decision-making and a nursery school. The community is divided for geographical reasons into two parts, the high and low, the low being the most inhabited due to having a warmer climate. Its inhabitants are very humble and live from agriculture and the cultivation of the “potato”, typical of the area, which is exported to other regions of the country. Currently they have an old water system, which no longer works well, due to the seals of the pipes and in the own catchments of the springs. In the upper part of the community, there is an aquifer that captures the water of the whole valley above it and the water goes down the aquifer along the whole slope where the village is located.

As for the habits and hygienic conditions of the population, they are precarious, they are not at all aware of the importance of boiling non-chlorinated water to avoid diseases. In addition, in most homes the guinea pigs are raised in the same kitchen, with the hygienic risks involved, and many of the kitchen smoke is sealed. The waste is thrown into the field free form without being managed.

In this last quarter of a century, the NGO Haren Alde, with Fr. Ángel Herrán Palacios at the head of this Augustinian institution, is aware of the importance of access to drinking water for all people, and as a fundamental human right, it is for this reason Which has tried to supply it by raising different water networks in the communities and villages of the region. As an NGO belonging to the Order of the Augustinian Recollects, it has become an indispensable institution for Chota, and is that its inhabitants are grateful for all the social and infrastructure work it has carried out in the region. But like everything else, it is never enough and can be improved, there is still a lot to do for this region and that is why it continues to work hard to be able to carry out more projects. One of these projects that is currently being worked on is the drinking water network of Centro Palma, which is going to be a pioneer in the chlorination system, since the old ones were not carried out with chlorination and forced the beneficiaries of the water To boil it to avoid infections and diseases.

Well, what is the project that Haren Alde Chota is raising and what is the work of these two Spaniards? The working group in the NGO is divided between a team of nurses, engineers and a teacher, who together carry out all the parts that any good project in cooperation must have. The project consists of two separate and well-differentiated potable water distribution networks. One of them for the upper part, which feeds on a small spring (0.3l / s) on a slope that is just above the community. The lower part, more extensive, has another network fed by another source, of greater flow (as 3l / s), which is just below the top and above the bottom. Thanks to the positions of these springs, gravity does its job to transport the water from the springs to the reservoirs of flow regulation and from there to all the houses by different branches. In the deposits in turn will be carried out chlorination of the water, which will drip. The managing board of sanitation services (JASS) will be in charge of renewing the base chlorine mixture every week and managing the entire network. The branches that carry the water from the reservoirs to the dwellings are geographically branched and arborescent in shape, where each house is at very large slopes and changes in elevation make the water pressures increase enormously, being necessary Pressure rupture chambers and load rupture tubes to re-put the mains water at atmospheric pressure each gap interval.

Jesús and Miguel, along with the civil engineer of the NGO, Ronald Fernández are in charge of all the design and checking of the network in question that is wished to raise. Through software such as Epanet, ArcGis or Autocad Civil 3D, the calculation of the entire network is being carried out so that users have good levels of water quality in terms of flow rates, pressures and free chlorine concentrations. It is already said that the new times and technology can save us many hours of work and make more comprehensive calculations and so the engineer Ronald is adding new tools such as Epanet and ArcGis with the help of Jesus and Miguel for use in future projects of the NGO.

In addition, like any cooperative project, not everything is to calculate and build, a well calculated and constructed network is totally unviable if the population that is going to benefit from it does not know how to manage that network, and of course, it does not have Minimum standards of hygiene to avoid diseases. Therefore, meetings with the entire population are necessary to give training talks on different issues. For the time being, in the meetings that have been held, with Professor Miguel Vega as NGO representative and project manager, it has been negotiated that the beneficiaries of the network itself are those who contribute unskilled labor. Also, the principles for the formation of the JASS that will be the one that will manage the network have been established, which will be in charge of operation, maintenance and sustainability of the systems and of course for the weekly chlorination of water in the reservoirs.

But to be able to chlorinate the water and be aware of not wasting it, it is first necessary to know why the use of chlorine, how it is made to mix it with water and how we must take care of the water so as not to contaminate it. In addition, the waste generated every day, must be accumulated and managed so as not to degrade the environment. To this end, there are already two training talks with the whole community and with the JASS in which the nurses of the NGO, Margarita Vásquez and Rocío Núñez, together with the two Spanish donors, are in charge of training and raising awareness in the community on issues Promotion of health and prevention of diseases and basic sanitation. In addition to the talks, the four were for two days visiting house by house, to check the hygiene and sanitary conditions in which the population lives and to give advice on how to improve them through habits and construction of specific spaces in each house for different uses.

Well, the works have begun, the population is divided into different shifts and days to work and the head of work, Don Pedro Diaz directs the works so that everything goes well. The uptake on the slope, the line of conduction and the tank of the high part are already raised. By the way, blessed complicated driving line, had to get up on 3 air passages hung from a steel cable to be able to overcome the enormous ravines that there are in that zone. For this the workers were provided with harnesses, helmets, gloves, good boots and vests to do everything safely and not suffer any kind of accident. Now you have to dig trenches to put the pipes along the entire network and reach each dwelling. 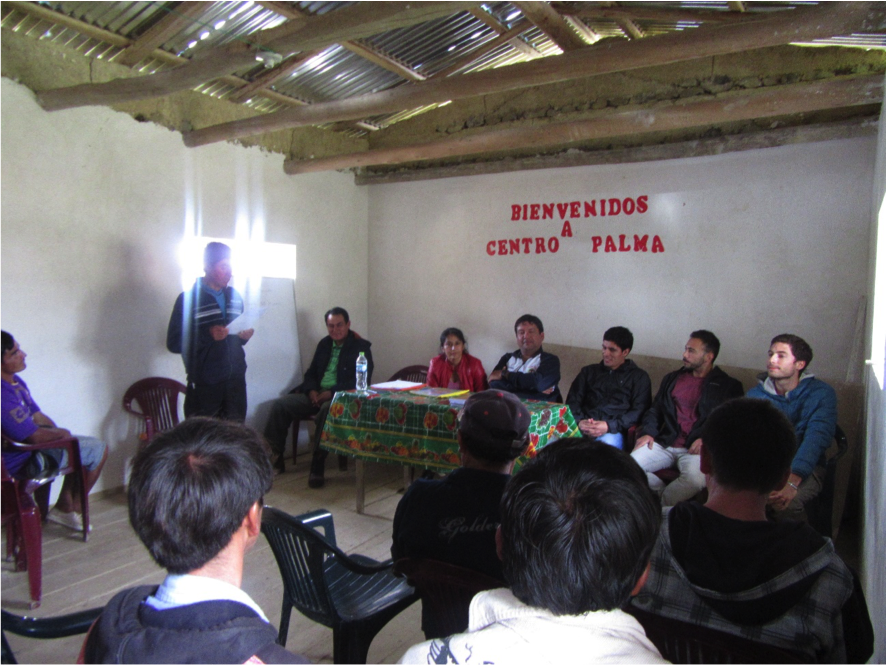 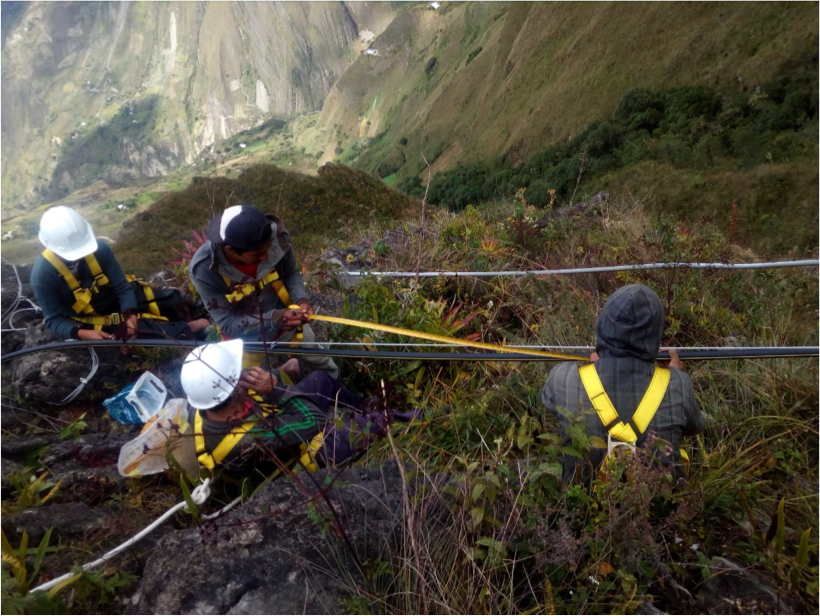 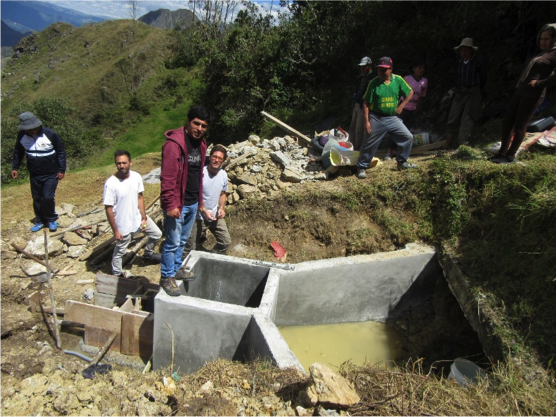 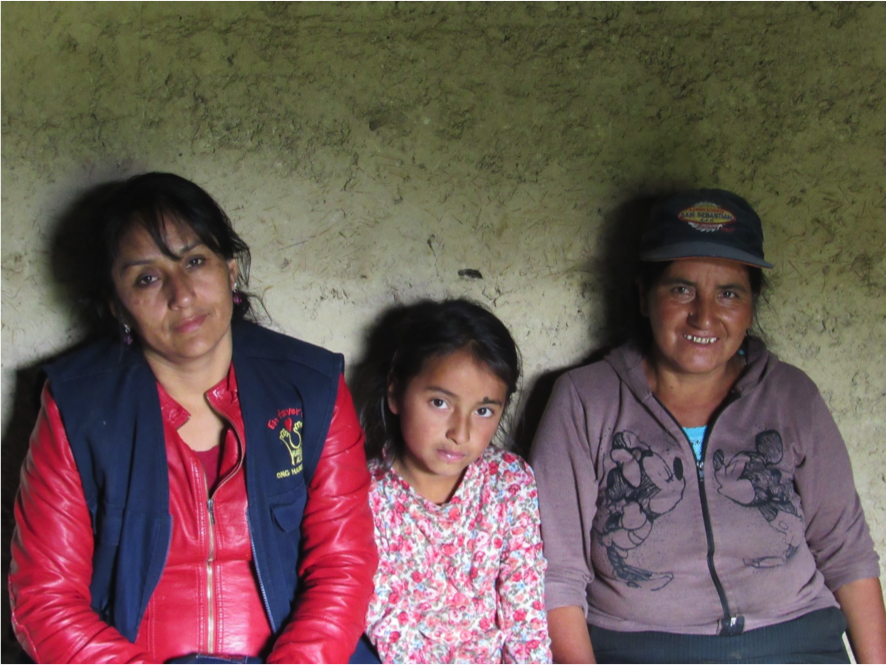