“I was fearful when I started painting St. Augustine”

The Augustinian Recollect David Conejo is the author of the new painting of St. Augustine which was presented and blessed this Monday at the Formation House of Las Rozas (Madrid, Spain). It is inspired by the first known representation of the bishop of Hippo.

Facing a blank canvas is a challenge. For the Augustinian Recollect David Conejo, the challenge was twofold: he had to fill in the space of 162×130 centimeters representing St. Augustine, father and doctor of the Church. For this reason, the artist born in Cartago (Costa Rica) affirms that he felt “fear” for all of this and because the image, which was presented and blessed this Monday at the Casa de Formación San Agustín de Las Rozas (Madrid, Spain), will be an image of worship and veneration. The new painting

The challenge of representing St. Augustine began a long time ago. “When I started classes five years ago, it was one of the projects I imagined I would do someday,” he says. However, David Conejo began this new work on behalf of the community, which wanted an image of St. Augustine, the patron saint of the house. “On my own I wouldn’t have undertaken it because I know it’s very difficult,” he confesses.

The initial fear has turned with the progress of the process into satisfaction; the same that he felt this Monday when he unveiled the canvas that covered the new work, which joins so many representations of St. Augustine. “He is a great saint who has been painted by the best artists of all history.

David Conejo has taken reference to the oldest known representation of St. Augustine: the sixth century fresco of the Lateran Palace in Rome. “My intention is that we remember, on seeing this painting, the first image we have of St. Augustine. The new painting re-edits the fresco, giving it more realism.

It was the Augustinian Recollect Enrique Eguiarte who, chatting in Salamanca, suggested that he approach and take this fresco as the basis for a painting of the bishop of Hippo. “He told me that when I wanted to paint our father, I should take as a reference the oldest image of St. Augustine,” he says. And why? No one has looked at this representation and it is the closest testimony to his death, almost 100 years after his death; it can be more or less faithful to how Augustine was,” he says. 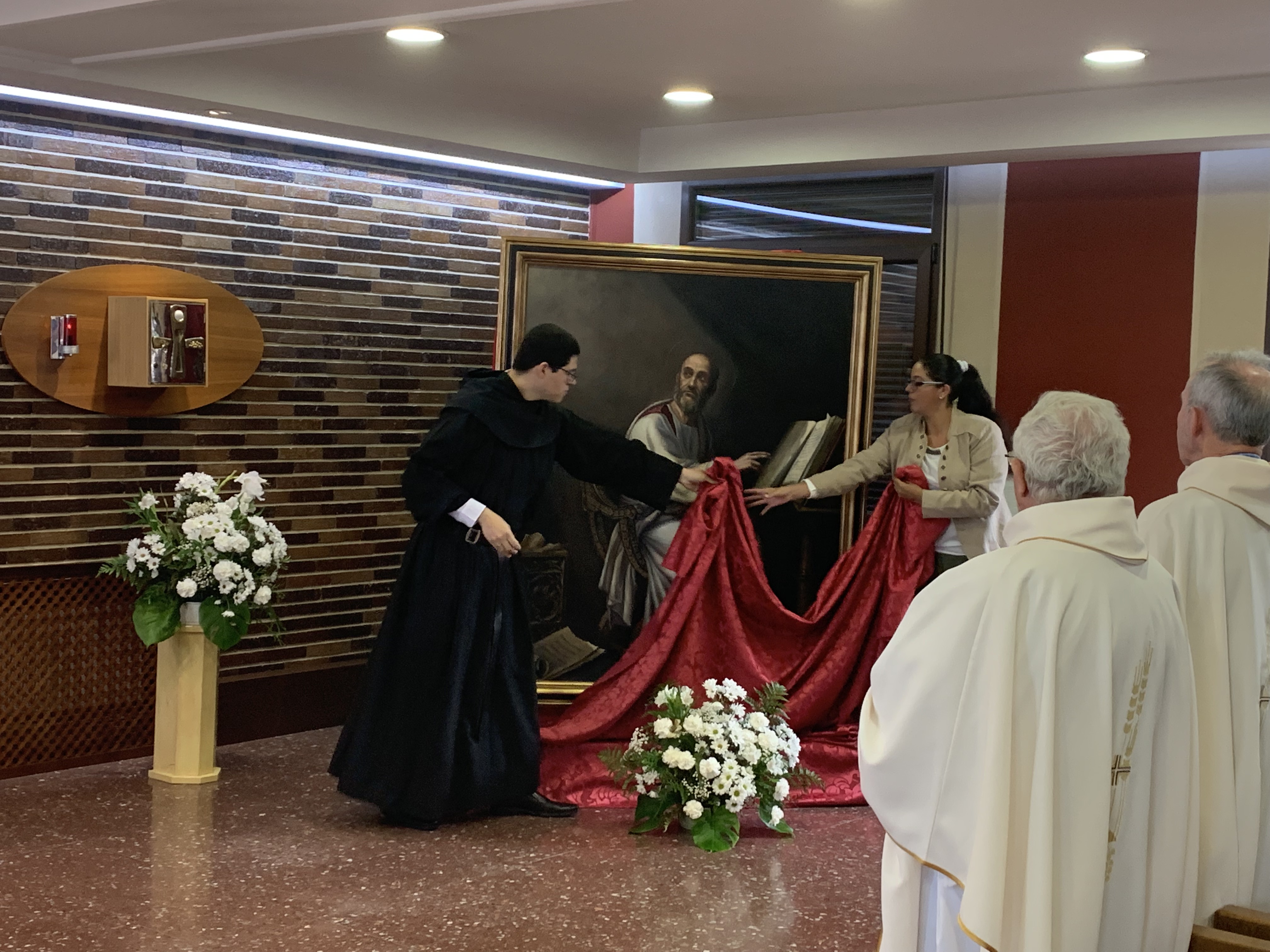 St. Augustine, contemplative next to the Word of God

The artist explains the painting in which the figure of the saint is surprising. “We can see a man of a certain age. He is not young; he is entering his old age,” he says. Everything in this painting reminds us of the Lateran fresco, the elements are the same. “The dress is a toga, the garment of the free Roman citizen, with a purple stripe alluding to his episcopal dignity. He also wears a robe, the toga of the senators,” he explains. All this “represents its importance for the one who embodied it in Lateran in the 6th century”.

The axis of the painting is the Word of God: “He is contemplative, pointing to the word of God; we see a bishop speaking and interpreting the word. With his right hand he points to the Holy Scriptures; with his left hand he holds a scroll that represents his extensive work.

St. Augustine is barefoot in the painting. This is how it appears in the original fresco, although David Conejo wanted to give it another meaning: “It is associated with the Recollection and its barefoot”.

In the lower left part, another detail. “There is the phrase that accompanies the Lateran fresco: many parents said many things, but this one said it all in the language of the Romans. This makes the spiritual sense resound. 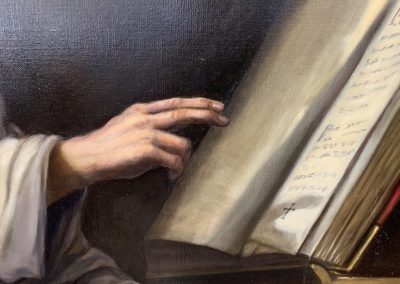 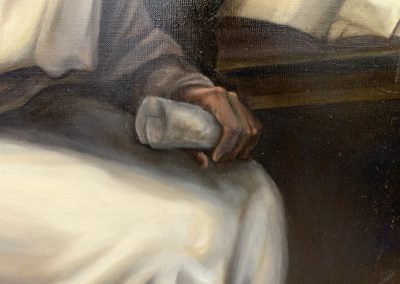 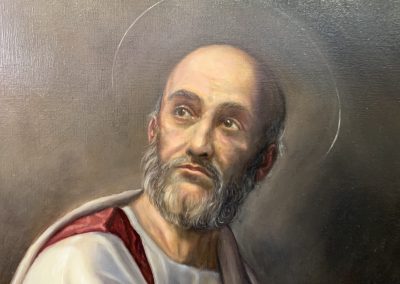 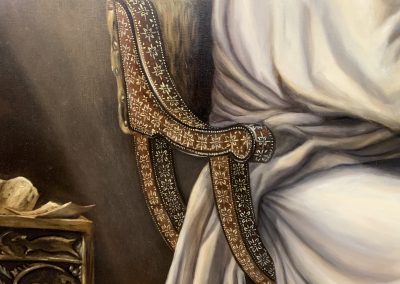 “An Approach” to St. Augustine

For the author, this painting “has meant a more experiential approach to how he is, to his way of thinking…”. With Saint Augustine, as with any work, David has had to carry out a closer study of his figure in order to familiarise himself and represent exactly what he wants.

In order to paint St. Augustine, one must always be up to the task. “Something is always expected from a painting of Saint Augustine. He has a personality, a testimony, a written work, his whole spirituality… It is difficult”.

The spectacular work, oil on canvas, realistic and baroque, is already in what will be its definitive place: the chapel of the House of Formation where it was blessed. There he will receive worship and, for many, he will clarify the image of St. Augustine. 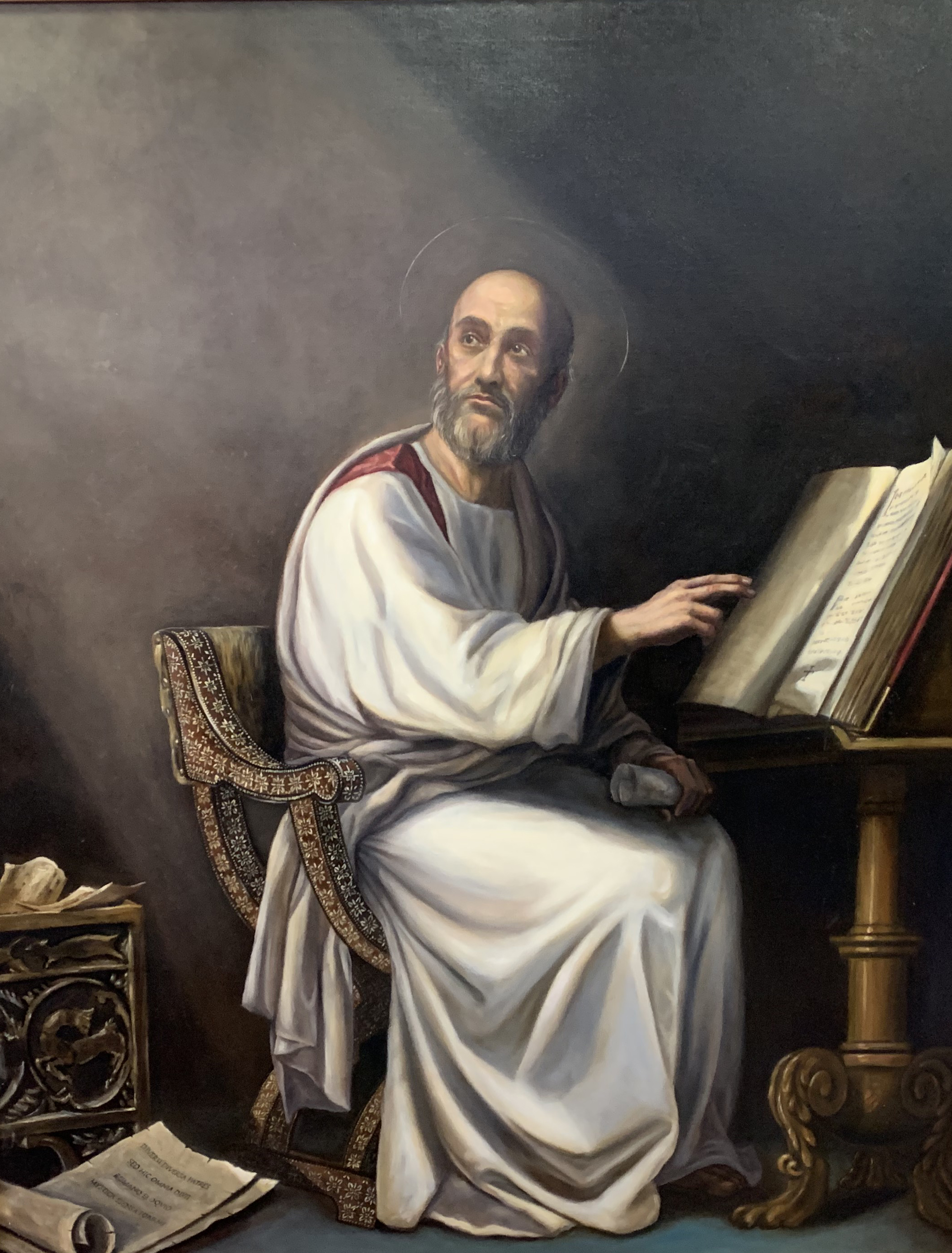