Rome and Mexico, united through the Virgin of Guadalupe de Sistina

The first representation of the Guadalupana that arrived in Rome was replaced in the Church of San Ildefonso and Santo Tomás de Villanueva on its 400th anniversary. Cardinal Carlos Aguiar Retes presided over the Eucharist: “With Mary of Guadalupe present, Mexico makes us present with Rome and with the Holy Father.”

There are tens of thousands of stories that support the walls of the Church of San Ildefonso and Santo Tomás de Villanueva in Rome, which for several decades was the General Curia of the Order of Augustinian Recollects. Perhaps many of these stories are related to the Virgin of Guadalupe, whose devotion is maintained in the small temple of the Via Sistina. The Guadalupana of this place has a unique history: it is said that it was the first representation of the well-known Marian devotion that arrived in Rome. The lack of documentation on this matter forces to speak in conditional.

After several years kept safe for fear that it was stolen, the image of the Virgin of Guadalupe was replaced by the cult. On the occasion of the 400th anniversary of the community of Sistina – the first of the Augustinian Recoletos in Rome -, the painting returned to its chapel, blessed again and renewed with security systems. The painting, which depicts San Juan Diego showing the canvas where the Virgin of Guadalupe appears, occupies the center of the chapel and is accompanied by four small paintings that reproduce various scenes of the Marian devotion of Mexico.

“We are gathered here because we want to be guided as a community. And, in particular, because the Augustinian Recollects want, before Mary, to ask the Lord to be their Spirit to guide them in their walk,” Cardinal Aguiar said in his homily. The Mexican archbishop indicated that “in the confidence of Mary we see how she lets her mold her heart, in the image of God.” He also asked to be left in the hands of the Spirit: “It is the challenge that all of us who are the Church of Jesus Christ have today: to be guided by the Spirit.”

On the replacement of the Marian representation, Aguiar Retes explained after the Eucharist that the fact that the Virgin of Guadalupe is in Rome “means that it is the same Mary who uses all forms to make herself present in the Church.” “With María de Guadalupe present, Mexico makes us present with Rome and with the Holy Father,” he said.

The blessing of the new chapel of the Virgin of Guadalupe joins the celebration that took place last April and was the starting point of the centenary. In the coming months an academic act will take place, other activities with the religious belonging to the ‘In Imum Cordis’ Training School and the closing ceremony, with the presence of the provincial priors. All this to celebrate the 400th anniversary of the community that in 1619 established the Augustinian Recollects on the Sistina road and which originally was intended to be the residence of the Order’s attorney. After four centuries of life, having been a general Curia, the community is now the Colegio San Ildefonso and Santo Tomás de Villanueva, where the Augustinian Recollect religious who study in Rome reside. 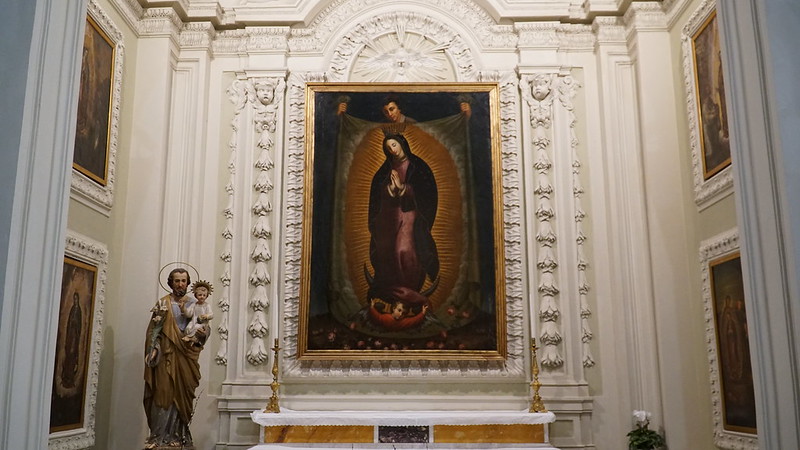