“May this pandemic make us more human”

The provincial priors present in Spain are trying to transmit a message of hope in the midst of the world crisis generated by the spread of the coronavirus.

The worldwide emergency of the coronavirus has upset the plans of the priors provincial of the Augustinian Recollect Provinces of Saint Thomas of Villanova and Saint Nicholas of Tolentine. The former, Miguel Angel Hernandez, would already be finishing the renewal visit to all the communities of Spain and preparing his return to Brazil on 30 March. The second, Sergio Sanchez, was due to make a visit to the religious community of Zaragoza this week.

However, both of them had to remain in Madrid without the possibility of moving because of the transit restrictions approved by the Spanish government. From here, they are witnessing first-hand the dramatic situation caused by the COVID-19 in Spain: thousands of deaths, more than 70,000 people infected and ghost towns.

In these difficult moments, the two superiors are in continuous contact with the communities of their provinces in other countries. They do not hide their concern for the religious, especially the older and more vulnerable ones. Prayer is now becoming stronger and more intense, for the lives with which the coronavirus is ending and for the health of the world’s population.

“A little virus is showing how vulnerable we are”

The Prior Provincial of the Province of St. Thomas of Villanova confesses that he is living these moments “calm but a little scared” by all that he is perceiving. He has been confined to the seat of the vicarage of the province in Spain for two weeks. During the first days he was very attentive to the progress of the pandemic, specifically in the country where he is now, but as the days have gone by he has avoided reading news “for mental hygiene”. “It’s very difficult to cope with this shower of information,” he says. In the meantime, he takes the opportunity to advance matters concerning the province.

Prayer takes on special meaning these days. In a letter to the religious of the province, Miguel Angel Hernandez asked that, in exchange for the suspension of pastoral activities, the rosary be prayed in community or the Blessed Sacrament be exposed to pray before him. In addition, every day after the hour in between, the prayer of Pope Francis for the end of the coronavirus is prayed. 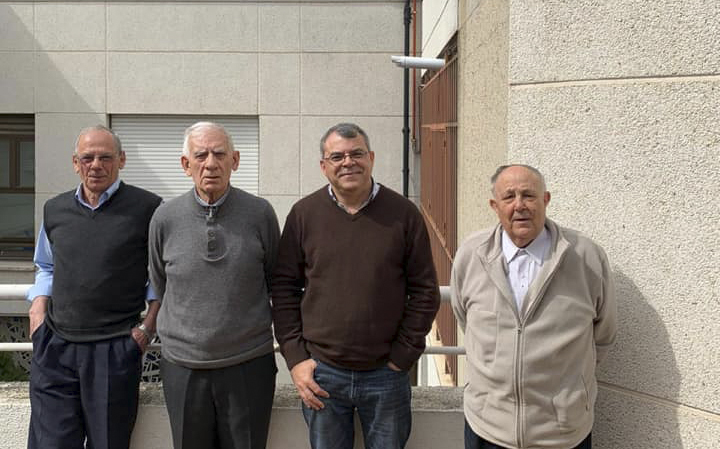 “May this pandemic make us all more human,” is the main reflection he draws from this situation. The superior of the province confesses that in his prayer he asks the Lord to grieve each person, “that the numbers do not leave us indifferent, behind each deceased person there is a life story and a family”. He also believes that, with the pandemic, society must realise “that we are not Gods, a small virus is showing how vulnerable we are” and that “we depend on each other and we need each other”. All of these teachings are being forced into a tailspin in just a few days.

He maintains contact with the vicars and priors of the communities so that they can inform him of the situation of each friar. He is especially concerned about Venezuela: “If what happens in Spain were to happen there, it would be a catastrophe”. The Prior Provincial believes that the public health service could not cope with hundreds of infections and the shortage of hygiene products would further aggravate the problem. “All that is needed in this pandemic, there are luxury items,” he says.

“Gestures of communion are taking place in society”

During this crisis, Sergio Sanchez speaks to the communities of the Province of St. Nicholas of Tolentine every three days. He is especially concerned about the situation in Spain. “There are ten communities, 110 religious and many of them older; it is a vulnerable group and fortunately all are well,” he reports.

At the moment he is living “with a heavy heart” seeing the suffering of so many people and the images of the dead and their families. In the face of this, he maintains that for the moment there are only two solutions: to comply with health measures to prevent contagion and to pray “saying that the Lord is with all who suffer. During these days he tries to transmit hope to the religious, seeking communion at all times. “Gestures of communion are taking place in society,” he says. He has observed this every day, when the religious of Spain go out to their windows to applaud the toilets, thus joining in the solidarity recognition of the whole society. It is, for the Prior Provincial, a sign of communion that the coronavirus has provoked.

These days he is following with special attention the many initiatives that have emerged on the Internet to replace the pastoral celebrations, especially in CEAR Costa Rica. “We have not yet realized the impact that a Whatsapp message can have with a reflection or the retransmission of a Eucharist,” he says. During the next few days, the Prior Provincial will propose to his Council – which will meet telematically – to offer the convent of Marcilla to the authorities of Navarra as a health centre.

The prayer is more intense during this time. “I unite the spiritual to the human”, he says. Sergio Sanchez is perceiving the piety of the religious in this situation. “Our spirituality is not disembodied,” he says, “it is in communion with the people who are suffering. His message: “It is up to us to do our best”.