A video call and a prayer: “This is our work”

The Augustinian Recollect nuns have been accompanying virtually the most needy families in Colombia during the hardest weeks of the pandemic.

Every day, at a certain time, the Augustinian Recollect Contemplative nuns of Our Lady of Candelaria Convent in Bogota gather for one of their tasks during the crisis of COVID-19: to make a video call to someone who needs it. They listen to the person on the other side of the screen, ask him about his condition and say a prayer together. It is a simple gesture but very comforting for the person on the other end of the phone. They decided it was the only help they could give in the face of the coronavirus. “Many people need to be heard,” says Sister Huarani C. Esparza. Since they agreed to take this action, the telephone began to work to attend to both people.

The convent is located on the border that separates one of the areas of high social status in Bogotá with another of the poorest areas. Since the beginning of the pandemic, many needy people have knocked on its door. They asked for food or work help; everything was welcome. Many of these people are of Venezuelan origin. Sister Hermila Sanchez remembers with impact that at one point they stopped knocking on the door. “They got tired, just shouting ‘we want to eat,'” she says. “When we opened the door and listened to them, our hearts were in pieces,” says Sister Huarani.

In the most absolute desperation many people came to the Augustinian Recollect nuns, although they could not help them materially. The community has no income, since its only purpose is contemplative prayer. Even the food pantry is donated by the Augustinian Recollect religious. They barely have four sheep living in the garden of the house, but the animals are more for company than for sustenance. Only one of the sheep was eaten on the occasion of some important celebration. 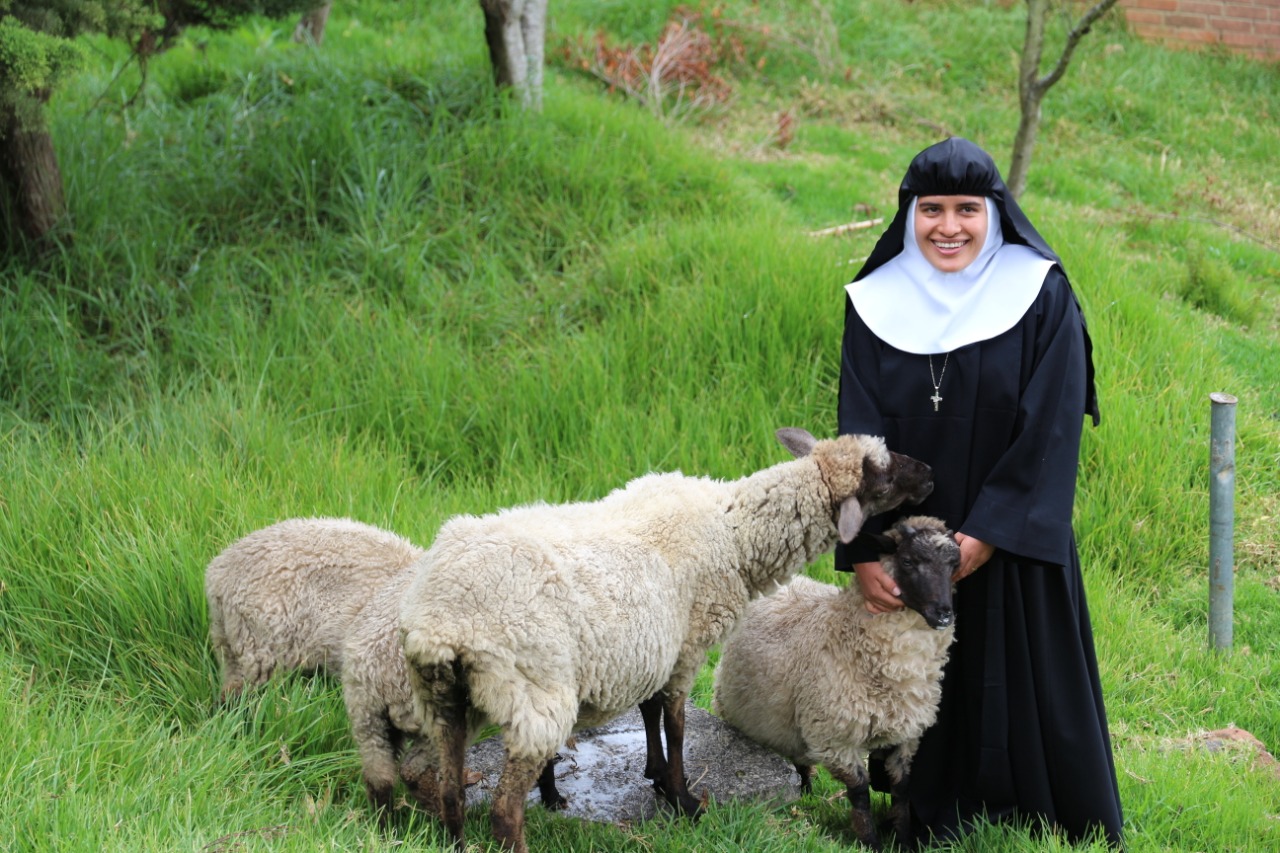 Faced with the incessant increase of petitions at the door, the Augustinian Recollect nuns began to question what they could do and how they could help. A first help came in the form of a poster: to avoid contagion of the coronavirus, they decided not to open the door to the people who were knocking, although they put up a sign: ‘We cannot help you with food or money, but we can help you with our prayer’. They invited people to leave their prayer intentions under the sign and the nuns collected them to include in their prayers.

One sister decided to go further and proposed to talk by video call with all the people who had asked for help or who were in the process of vocation. Since then they have all done it together or separately. “We cannot give anything, only listen; we do not have work, this is our job: to accompany”, says Sister Huaraní Esparza. They listen, attend and pray with the whole family. They have even called the Augustinian Recollect religious several times. “They are always in their apostolates with people and suddenly they are alone,” the contemplative says.

The topics discussed are very diverse, although they usually end up converging on the same issue: faith. All the people have asked them where God is in these difficult moments. “Many people have realized that only God remains,” says Sister Hermila. This nun met a lady who treasured many diplomas and also silver. “After all her life she asked herself: Who am I holding on to? Only God,” she explains.

The sisters speak to people about God, “because it seems that He is not there”. Huaraní was surprised by the case of a girl who is in the process of vocation. Her father could only go out twice in weeks and at home they only ate once a day. “They were happy because they ate as a family,” she says. They tell how they are doing, but in the bad things they find God’s love close”.

As contemplatives they do not leave the convent except for what is necessary. Nevertheless, during the pandemic that has forced millions of people to be confined to their homes, they have gone out virtually to be by the side of the people who suffer most, who need to be heard, who are waiting for a prayer… even if it is through a screen.