Following the opening of the special emergency campaign of the AAugustinian Recollect Family following the severe floods that have ravaged northern Peru due to the El Niño weather phenomenon, the next step is to develop continuity projects and support the Families who have suffered more damage.

The Parish of Our Lady of the Consolation of the Augustinian Recollects in Chiclayo has already produced a first list which includes twelve families (39 adults and 21 children in total) who have suffered more damage at home and have had more losses of material goods. These families have an average income of 550 soles a month (160 euros at the current rate), insufficient to meet the emergency they have suffered at home.

Although the first aid has been organized locally, with the collection of basic necessities, reconstruction and more specialized care requires external support, for which this religious family of the Augustinian Recollects, present in the region Since 1967.

In other countries you can collaborate through any community of the nearby Augustinian Recollect Family.

The region has a subtropical climate, of pleasant temperature, dry and without rains; This is due to the strong winds called cyclones that lower the ambient temperature to a moderate climate during most of the year, except in the summer months when the temperature rises and becomes a tourist destination for its spas Port Etén and Pimentel.

Normally its climate varies between 15 and 23 degrees Celsius. However, with a periodicity varying between seven and fifteen years, there are very high temperatures that can happen of the 35 ° due to the phenomenon El Niño, with regular rains and extreme increase of the water of the rivers. El Niño in 1998, which caused daily rainfall of 100 mm. In February of that year, has even been surpassed by El Niño of March and April of 2017.

The consequences have been the loss of human lives and disappearances, the existence of injured people, the destruction of hundreds of homes and infrastructures (schools, nursing homes, hospitals and health centers, public service buildings) , Difficulties in the distribution of electricity and drinking water and the proliferation of diseases.

Public aid from the various administrations has been completely inadequate, since all forecasts and capacities have been overwhelmed and there are many rural areas that have come too late or even have not yet arrived. 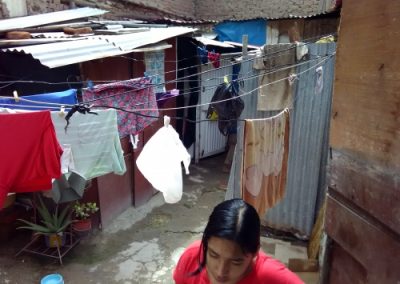