In a private audience, the participants of the 56th OAR General Chapter present to His Holiness three artistic expressions closely linked to the history and present of the Church and the Order.

After the Pope delivered his message, the Augustinian Recollect friars who attended the private audience greeted the Holy Father one by one. Three gifts of significant artistic value and important connection of the Order with Pope Francis and the Church were then presented to the Pontiff: a painting, a sculpture and a song. The Holy Father graciously received the tokens of the the Augustinian Recollects’ esteem and gratitude for him.

The first of the gifts was an oil painting entitled Lucis Custos, a work executed by three artists and very much related to the spirituality of Pope Francis. Alejandro Decinti, Antonio Decinti and the Augustinian Recollect David Conejo’s collective work portrays St. Joseph asleep on a chair while holding a sleeping Child Jesus. Though her face is not seen, Mary’s left hand holds a candle while her right protects it from being blown out. Joseph and Mary are the custodians of the true Light, which is Christ. The painting, aside from representing a tender scene, makes an excellent play of light and shadow.

The artists wanted to give this painting to the Holy Father on the eve of the solemnity of Saint Joseph as a sign of closeness. Work on it began a month ago, when it became certain that Pope Francis would receive the capitulars in audience. “Doing this painting has been a unique experience”, says David Conejo.

Health of the sick

In 1634, the image of Our Lady of Health arrived in the Philippines. It was a gift from the Discalced Carmelite nuns of Mexico to the seven Augustinian Recollect missionaries who were traveling to the Philippines. Her devotion rapidly spread; interrupted during World War II, it was revived some years ago, gaining strength as Filipinos sought her protection during the COVID-19 pandemic.

A faithful replica made by Filipino sculptor Fermin Bagalso and adorned with many jewels was handed to Pope Francis by Prior Provincial of Saint Ezekiel Moreno Province fray Dionisio Selma who explained to the Pontiff that the sculpture was a “witness of our celebration of the 500th anniversary of the coming of Christianity to the Philippines” and that the devotion had “brought healing to many sick people during the pandemic”.

Music and a Father’s heart

The third gift was a CD containing a song composed by Augustinian Recollect fray Jose Manuel Gonzalez Duran  entitled “Con Corazón de Padre” (With a Father’s Heart), the lyrics of which are inspired from Pope Francis’ 2020 apostolic letter “Patris Corde”. The musical score was also enclosed, with the explanation that the song is a sign of gratitude to the Pontiff for having written the apostolic letter and having dedicated a year to Saint Joseph, protector of the Order. 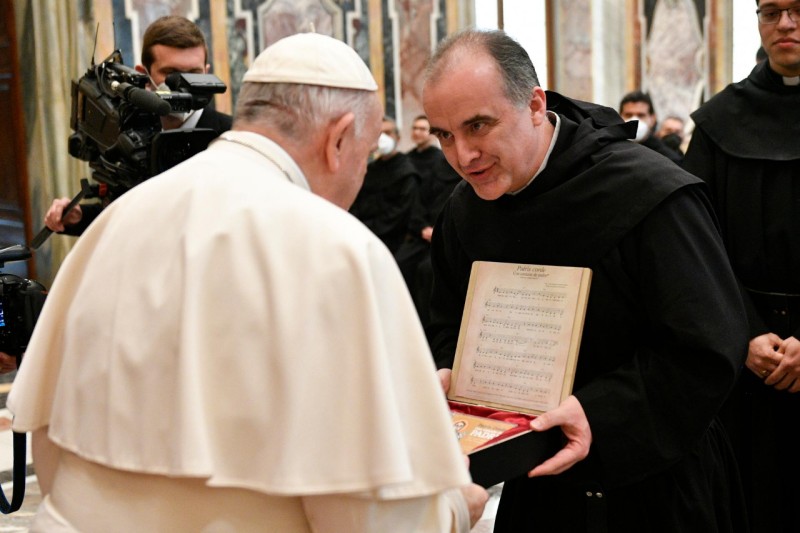